Permanent Exhibits
Texas & Pacific Railway
Renowned as the Unique Dining Capital of Texas, Roanoke's beginnings were humble - and there were not nearly as many places to eat as there are today. The city we know today as Roanoke was founded, platted, and named by the Texas and Pacific Railroad when it laid track through the area in 1881 in its push to construct the first southern transcontinental railroad line.

Stop by and see our homage to the railroad, a collection which includes railroad memorabilia, as well as a Texas and Pacific model train. Do not forget to blow the train whistle before you leave! 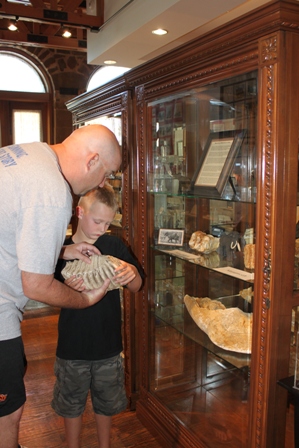 Did you know that during the last Ice Age, 80,000 years ago, Roanoke was a swampy, wet grassland inhabited by massive mammals? Giant mammoths and mastodons roamed the area eating grass and other plants with their giant molars. Over 50 years ago, a Roanoke resident unearthed some of these massive teeth, which are now on display at the Roanoke Visitor Center and Museum.

Come in and explore our collection of vintage clothing, including a bodice from the 1890s, horse racing silks from a local jockey, and several fine examples of World War II military uniforms.


They say a picture is worth a thousand words, and the pictures on display at the Roanoke Visitor Center and; Museum tell the story of Roanoke's colorful past in wonderful detail. Look at pictures of Roanoke 100 years ago and imagine what it was like to live here then.

Veteran's Day is a time for us to honor all of those who have so bravely served our country as a member of the United States military; we want to honor them year round. Come see the advancements made in combat helmets as you compare a metal helmet from World War I to an advanced combat helmet used by our soldiers today. In addition, we will feature a display of World War II uniforms, a Purple Heart Medal of Honor, as well as a pictorial tribute to local veterans.

This summer, the Roanoke Visitors Center and Museum features concurrent exhibits at the former Silver Spur Saloon and at the new Roanoke City Hall. The museum's new temporary exhibit showcases the 2007 renovation of the former Snead brothers building, which houses the museum and visitor center. Photos show the derelict building, old Oak Street, and the amount of work done to preserve the building. The exhibit also features a few artifacts from the first mayor of Roanoke, Hugh Jenkins.

At City Hall, the entrance foyer features antique toasters from the early 20th century and a collection of antique "sad" irons that were used in the 19th and early 20th centuries for ironing clothes. So this summer, take a few minutes to visit the city's galleries and give thanks for electricity and air conditioning.